The Māori Loanword Twitter (MLT) Corpus is a diachronic corpus of nearly 3 million New Zealand English tweets, posted between 2008 and 2018. The data was collected by extracting tweets containing one or more terms from a list of 77 Māori words and phrases. We then used computational machine learning methods to clean up the raw data, because many of the tweets were not relevant to a New Zealand English context (for instance, the loanword Moana, meaning sea, is commonly used to refer to the Disney film/princess).

Below is a visual representation of the steps involved in building the corpus.

For further information, see our paper.

This table shows key stats for the different components of the MLT Corpus:

*Please note that these statistics differ from what is stated in the paper, because we later refined our classifier, opting for a Naive Bayes Multinomial model that considered both unigrams and bigrams.

The following visualisations were created by training Word2Vec embeddings on the Māori Loanword Twitter (MLT) Corpus. Hyper-parameters were optimised by minimising the median ranking of a list of given word pairs. The vectors are projected into two-dimensional space using the t-SNE method. 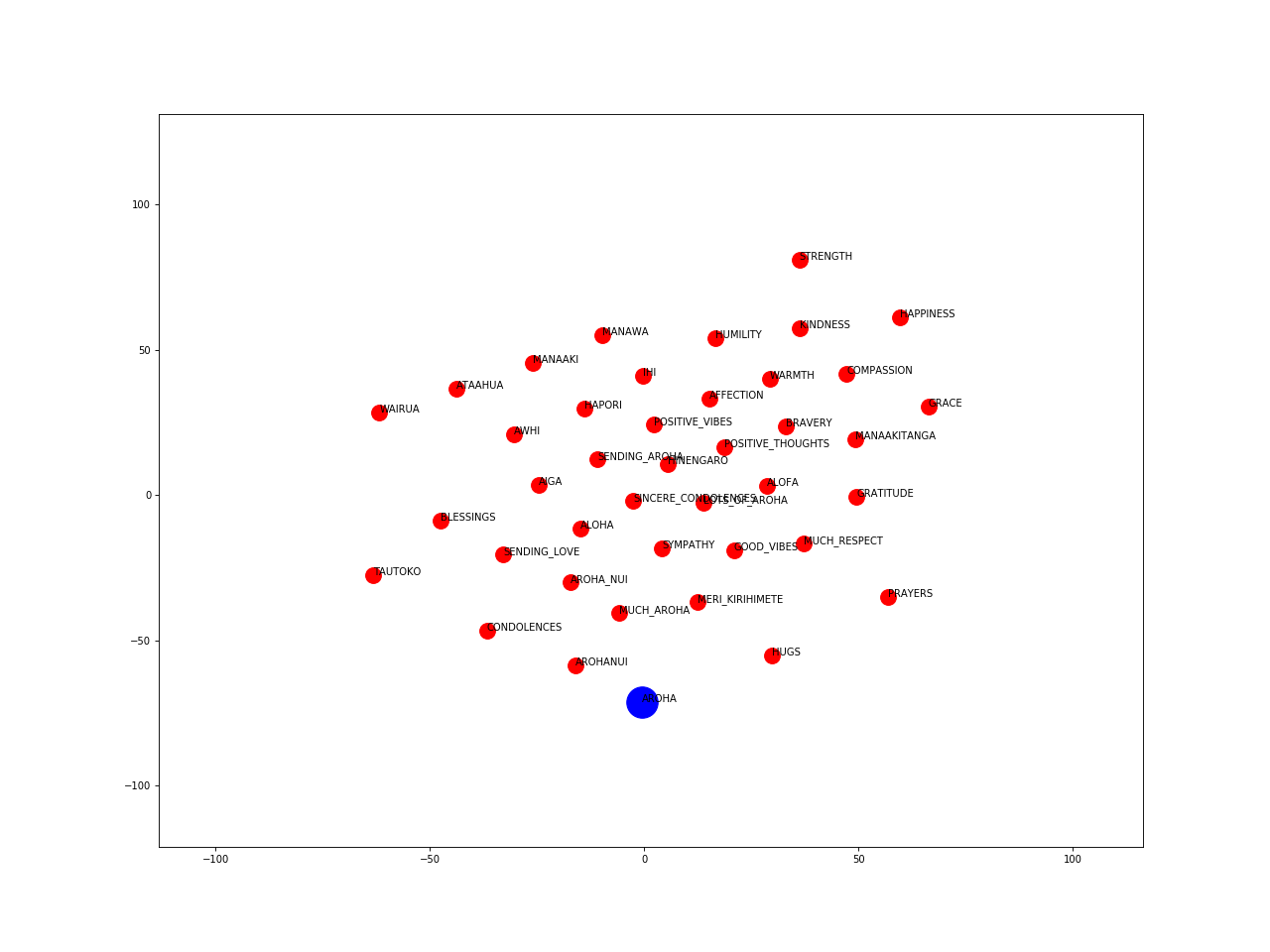 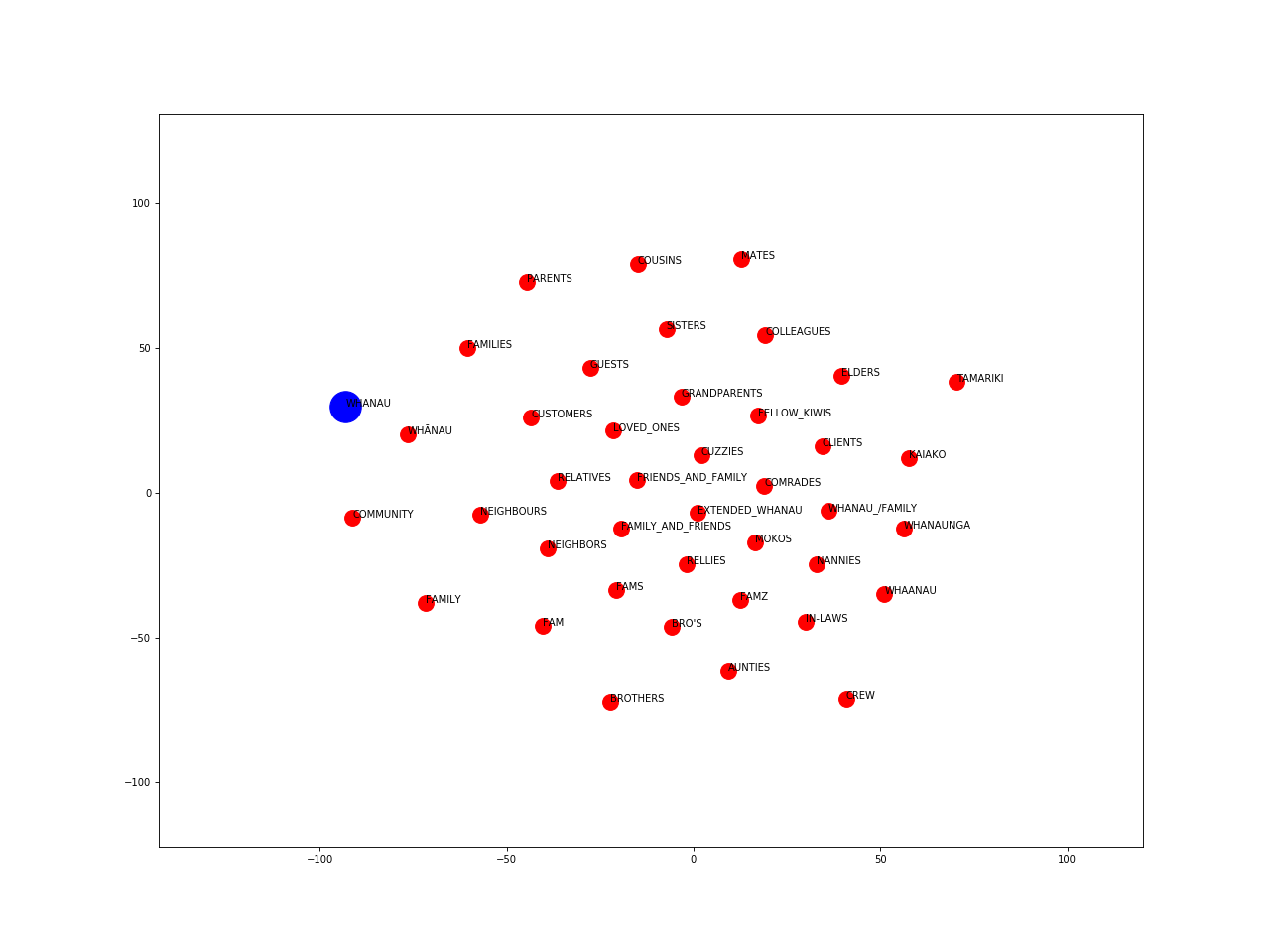 Tweets in the MLT Corpus can be hydrated (downloaded from Twitter) using the code provided. The source code is adapted from Twitter's sample code for API v2 endpoints.

Note: Many tweets in the corpus are no longer publicly available and, as such, cannot be downloaded. Please email David Trye if you would like access to the complete dataset.

The speed at which you can download the corpus depends on the rate limit for your Twitter developer account (e.g. 300 or 900 requests per 15-minute window). If you exceed the allocated limit, a 429 'Too many requests' error will be returned.

This will download the corpus in batches of 100 tweets. If you use the default settings, the script will download the Processed Corpus V2 (though you can change the FILENAME in the code to any of the other CSV files). The Process Corpus will take roughly 24 hours to run, as it will attempt to download 30,000 tweets (300 requests x 100 tweets) every 15 minutes: 2,880,211 tweets / 30,000 tweets = 96 fifteen-minute batches, and 96 x 15 = 1440mins = 24hrs. (By comparison, because there are only a few thousand tweets, the relevant and irrelevant labelled tweets will download almost instantly. The Raw Corpus V2 contains some 4.5m tweets and will take approximately 38hrs to download.) The resulting file, output.json, is only pseudo-JSON (each batch is separated by a line in the form "Batch X, Code Y", where X and Y are numbers).

This script will produce a file called mlt_corpus_download_<timestamp>.csv, which you can then open in a spreadsheet application. Unfortunately, due to a Unicode formatting error, some characters will not be correctly displayed (note: they are still correct in the JSON file). For now, we indicate problematic characters with [unicode], but this is only a temporary fix.

If you use the MLT corpus, please cite the following paper:

The Hybrid Hashtag (HH) Sub-Corpus is a subset of tweets in the MLT Corpus containing hashtags made up of Māori and English words (so-called "hybrid hashtags"). There are 81 hybrid hashtags in this dataset, used in 5,684 tweets and posted to Twitter by 3,771 distinct users. Popular hashtags include #waitangiday, #maorilanguageweek, #gokiwi, #proudkiwi, #kiwipride and #letssharegoodtereostories.

If you use the Hybrid Hashtag Sub-Corpus, please cite the following paper:

We graciously acknowledge the generous support of:

From here you can search these documents. Enter your search terms below.